Sharon Dolin is the author of seven books of poetry.
Read a sample poem from each book.

Make Your Home in the Imperfect Present

How many times have you thought this
is not it—when will
my true life begin?

that never seems to happen?
If this is it, the tablets of your life
broken, then reconstituted

so instead of God writing,
a stuttering human
whose name means drawn from water

incised the words you live by.
If this imperfect not-as-you-had-
expected is the show--

if all your life could be lived
in the improvised now:
like the time you were awakened

early in Bologna, brought before a class,
unprepared as you were, to read and speak,
and because you had no time

for anxiety to take your breath
away, you stood and read
and spoke into the moment.

building from the shattered
pieces of some
inconceivable whole.

Imperfect Present is a stunning book, not simply for its depth of feeling, piercing wit, and well-earned wisdom but also for the brilliant play of language, the sheer sonic pleasures of it.--Natasha Trethewey, Former U.S. Poet Laureate

Read a review of Imperfect Present ​in MER here.

Make Full Use of What Happens to You
--after Epictetus

In the face of broken
build a tower of breath
In the eye of deceit
carve a hive of light
In the rumble of regret
fashion a new net
In the oracular gut
leaven what’s left
In the fall of grief, harvest
winter wheat
In the infested wound, bring leeches
to swoon
In the empty bed, writhe
a pelvic bone
In the stung heart, harrow
a new song
In Fortuna’s backswing
let fallow fill wings

When I lacked
desire my love unlatched

his key from me and soon
I lacked a lackey. Deserted,

unstirred, to no sir inured.
Once lacking, desire grew

for a sire. Now
desire what I lack

for the bandoneon
player—layer-on of love

and blandishments.
There is an ache in lack

when I wake on my back
oh what I lack: a sharp ach!

What song more plaintive
than the lone key of me?

The moan key of monkey
me to let go desire? What

ire is higher
than to find a liar where

I had once been desired.
(now deserted, de-sired)

my unplucked heart
lyre in the dawn wind

ready to be strummed
into fire.​

Whirlwind is a book of wonderful whimsy, grace and bite.—Terrance Hayes

Gone to pick berries. Be back
by two, hands stung blue.

Graze this shaggy bush for knowledge
of the good—having clung blue.

Past desert's edge—plum trees;
off the plain of Sharon—the sea rung blue.

Winter of frozen cherries matted in his beard,
Spring buds in hair tangling without the man.

Go. Drive a car,  the weather wanders you.
Life's a zoo, stroke pangolin without the man.

Flux redux, can't undo. No mournful piccolos.
Such stuff as we are: Philandering without the man?

In Berkeley women loved women, men themselves.
Hard to play it straight, gamboling without the man.

What if, after all is bled and flung, it won't add up?
Don't be so sure you can handle it without the man.

Sleepwalking roofs—you never were that sort.
Picked up, the pieces mangling without the man.

Got floaters in the eyes, water on the knees.
Getting older—still newfangling without the man.

Adrift yet moored, unfocused—is this how it'll end:
Your name's spelled mandolin without the man.

from Burn and Dodge (2008, winner of the AWP Donald Hall Prize for Poetry)

She writes with such pop to her lines that I'm reminded of Auden's definition of poetry as "memorable speech."—Bob Hicok​

you practically swallowed whole?
What made the officer give me the box
after he broke through your door,
found you face down?

I took it home to open
having first changed my locks.
On its lid clipper ships sailed and sheep
herded down a snowy path;

how could I find what had shook your heart
and felled you. I flushed the rest away.
From the empty tin a braying goat
flew out and fastened beneath my chin:

your father spewing lies: I’d watched
you die, then fled, pretended
the door was chained against me.
No matter the cop saw I couldn't get in.

No matter he gave me the tin.
No matter your room became
a box of sweets you’d
Houdini’d yourself in.

Is that why I've jammed the tin
with beaded glass the shade
of your sea-eyes, and amber--
sap within your tree that no longer rises?

I lift them out, set them gleaming
round my neck, let other men
seize me. The goat begins to shrivel,
loses its voice, drops from my throat.

And here you are
still listening
inside the tin each time
I open it.

​These fine poems pull the reader in—enchanting, disturbing, and consoling, all at the same time.--Eavan Boland

were not an emaciated bird
who stands shorn of everything
but her pocketbook
she dangles—empty
save for her lipstick and pounds of change--
the sac worn outside
like the one in which I curled, slept, sucked
my thumb—if there weren't so little left of her
barely keeping herself erect––how could she
ever keep anyone—herself—warm again--

if my mother were not a flamingo that we leave in
the hospital lobby—half–terrified
that her bed—so close to the other patients'
coats—might threaten her––my mother,
who has fought her visions for 45 years
and received no medal--
watched her husband wrench away out of disgust
and grief—if her newest children were not wires
she sees everywhere—sparks
of her life escaping to endanger her . . .

then I could not be brave--
become like
my sister—unshaken who holds me in
the bathroom of some forsaken diner
in New Jersey—after my mother has
cursed the meal, everything, even the rice pudding: slop,
real slop—we have to laugh
at how right she is--
as she gets up
and hobbles out of the diner
to the parking lot--
not knowing where we are taking her
wounded by all the people who
might kill her

except for me and my sister
who glide her
to the hospital emergency
just let me put on my lipstick
refusing my compact mirror—an expert
against a parked car's reflecting glass—she
takes up the pink stick and traces—her better
lips—the ones she will purse and hold and
question me with
when she goes to sign herself in--
waiting for me to nod, yes, it's okay, you can sign
no one will keep you here forever—no one will
shock you again—no wires—no one
will do that to you again.

from Heart Work (1995)
Sharon Dolin is without question a writer whose work will help to define the resources and determinants of her generation.—Robert Creeley

The poems in this outstanding first collection are notable for their clarity, audacity, and depth—compelling in their dramatic urgency and emotional power.—Phillis Levin 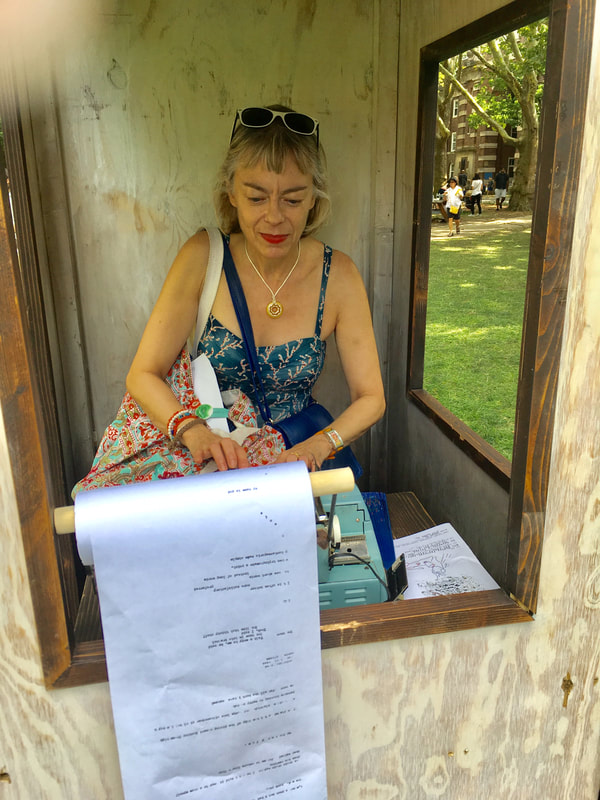 Sharon Dolin Interviewed on advice, poetry, and “happenstance”
in The Missouri Review